The Nvidia Case Study is available below.


NVIDIA created a tight-knit community of super fans using Ambassify and saw a 5X jump in engagements across the board.

Read our case study below for more details!

Want to experience Ambassify for yourself? Book a demo. 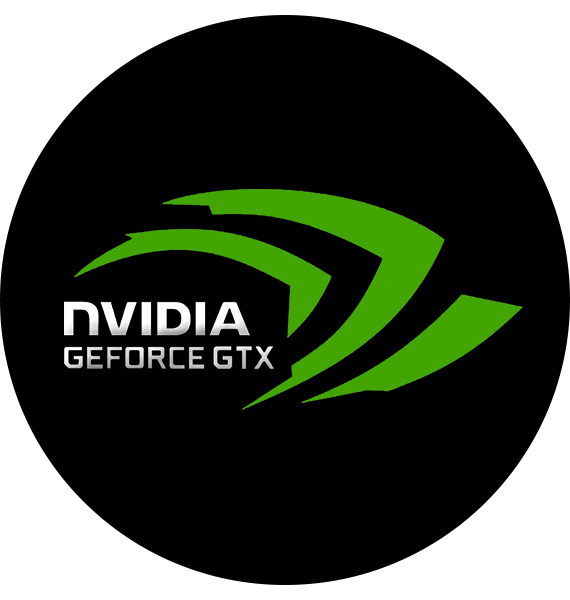 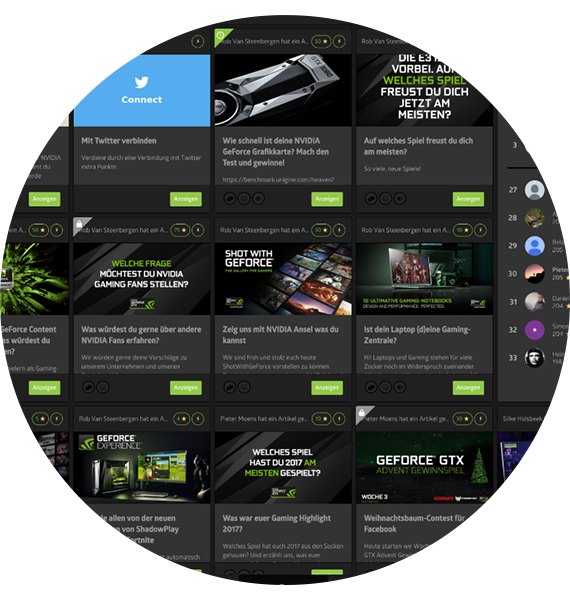 • Reached out to NVIDIA GeForce German Facebook audience with a survey. The survey included numerous questions and collected the names and the email addresses of the participants.

• Created an exclusive NVIDIA GeForce membership club and started building a meaningful relationship with the members.

• NVIDIA GeForce members averaged 5X more interactions than the control group (fans who were identified as promoters but were not members of the exclusive NVIDIA GeForce club on the Ambassify platform). 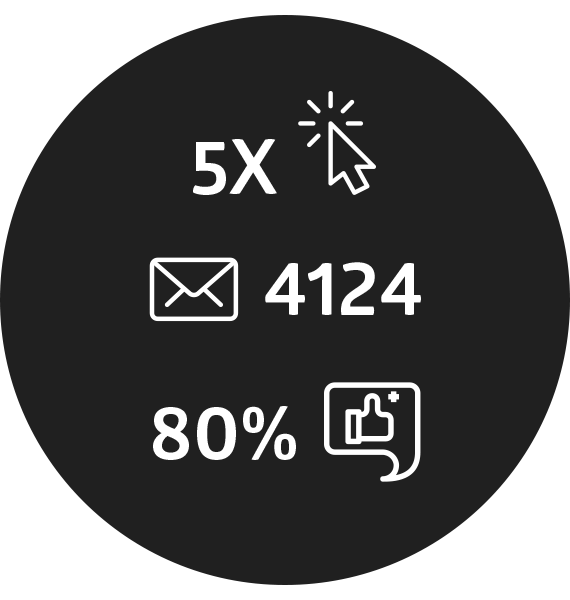 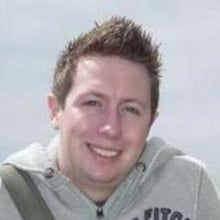 "For us, it was really important to know who our biggest fans were. Facebook is a tool to reach people, but you don't own the data. Thanks to the collaboration with Ambassify, we were able to transfer the data from Facebook to Ambassify and identify our biggest fans, so we could bring them together in an exclusive and engaging community.

The results were amazing. We created a community of super fans who are 5 times more engaged compared to the people who didn't join. With that army of super fans, we can continue to steadily build our advocacy program and expand our reach and influence."

After being approached by NVIDIA, worked with them to figure out their most active social media platform. We ended up focusing on Facebook as the channel that would give us the greatest return on investment. On Facebook, we had access to a large pool of people from which we could easily recruit potential advocates.

Our first step was to identify those fans who would be willing to go the extra mile to promote the GeForce brand. We had NVIDIA’s Facebook team publish a survey through which we collected contact data we needed to feed into Ambassify to launch an NPS campaign.

This was a great success all by itself since NVIDIA now had a direct email line to a lot of potential customers whose contact details were not previously available to them.

We imported those emails into the Ambassify platform and sent out that crucial NPS question:
How likely are you to recommend us to your family, friends, and colleague? 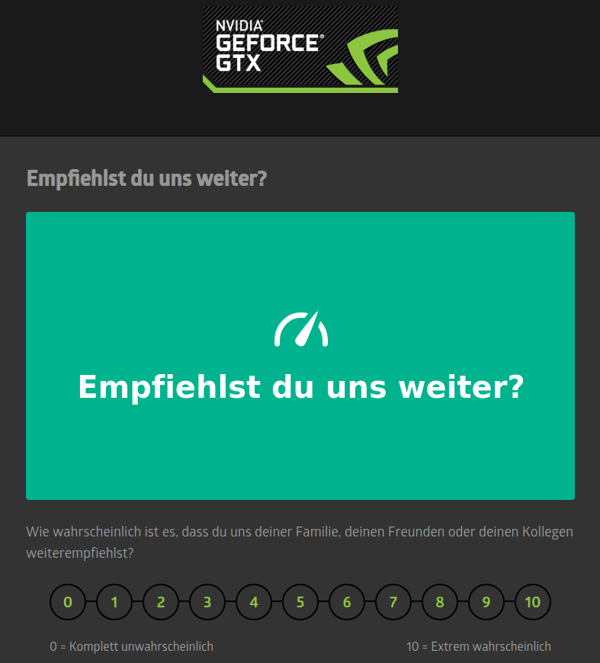 We collected the results of the NPS over the course of four days. Our open rate ended up being 33.5% (1,412 users), and it resulted in 767 NPS answers. NVIDIA’s NPS score was calculated and assigned a numerical value - 63, calculated by subtracting the percentage of the detractors from the percentage of the promoters. Translating that into workable numbers, it meant that we had 553 fans that were prime advocate material, 145 passives, and 69 detractors.

Going forward, we could (with minimum effort, we have to add) boost engagement on various brand-related challenges by connecting with those 553 promoters.

Our next step was to build a thriving community of super fans. Of course, before doing any hard ‘asks’, we had to build a relationship with those people, otherwise, our calls for participation might fall on deaf ears.

Now that we had the NPS results, we could filter and clean up the list, leaving only those people we identified as promoters. We didn’t want to include passives or detractors because that can backfire - regularly contacting people who explicitly indicated that they are not inclined to promote your brand can put them in a bad mood. The results of that unwanted communication are often bad reviews and negative social media comments.

That said, we also didn’t want to overwhelm the potential advocates with email messages before signaling that NVIDIA is ready to move forward with including them into various activities, both social media-related and others. This required relationship-building activities, such as asking questions via Facebook and Instagram, responding to comments, and, generally, engaging with the whole audience.

The screenshot below is just one example of how NVIDIA’s social media team started building bridges with the brand’s promoters. Questions about the most played games, most anticipated games, and 4K gaming were all featured. The Instagram team even invited fans to submit their own questions to be featured in weekly round-ups. 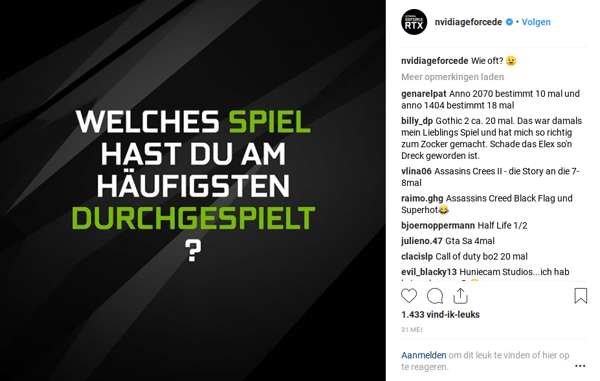 After a couple of weeks of relationship-building, we were ready for our big ask. We reached out to our pruned list, asking people to join an exclusive NVIDIA GeForce membership club on the Ambassify platform.

Out of 553 promoters that were on that list, 145 opted to join the new exclusive GeForce club. They now formed the pillar of future advocacy activities. Through the community, they would get prompts to engage with social media posts, answer questions and surveys, leave reviews, and interact in various other ways with the brand by using the Ambassify platform. Their actions would earn them points, which could then be exchanged for exclusive GeForce perks. 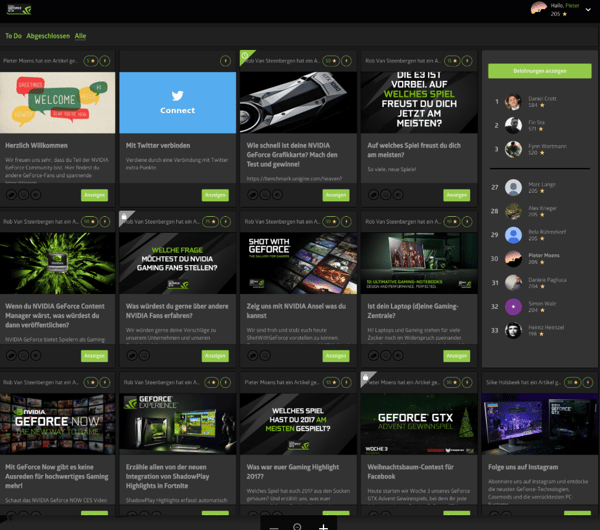 The goal was to find out how much could a tight-knit community with an incentivized program outperform fans who are not members in terms of general engagement and participation in brand-building activities.

Our prediction that a community of super fans would be more inclined to participate in various asks was right on the money. Additionally, there are sufficient data to extrapolate that these community members were also more active on social media networks than the fans who did not participate.

At Ambassify, we know the power of advocacy marketing. Our assumption about increasing engagement through targeted communications and relationship-building wasn’t really an assumption at all. It was an educated guess based on years of experience we’ve collected by working with dozens of other clients.

In NVIDIA’s case, the results of an engaging advocacy program were staggering.

A visual for the below points

Out of 145 active club members, 116 have interacted at least once with our soft and hard ‘asks’. Our control group (4100+ strong) had only 576 interactions in total - they were approached with the same challenges and ‘asks’ but, to them, we delivered them via landing pages (links sent through email). 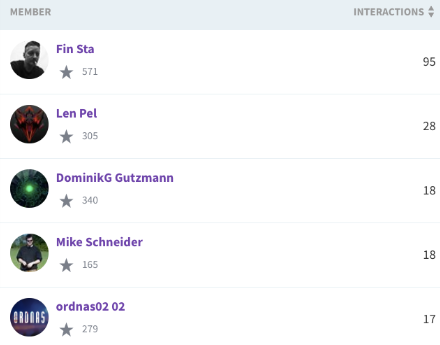 One other (often overlooked) benefit of launching this advocacy program was the fact that NVIDIA now had access to more than 4,100 Facebook fans via their email address. These fans could be warmed up to the NVIDIA brand in the following months and slowly included into the official advocacy program.

To sum this up, NVIDIA GeForce advocates (club members) had, on average, 5X interactions and responded 5X more often to NVIDIA’s questions and ‘asks’ than fans who did not participate in the closed group.

Their interactions were also more meaningful - they were generally more inclined to comment and share social media posts, as well as do more time-consuming activities, such as answer questions, fill out surveys, or leave reviews on review sites.

Taking Advocacy To The Next Level With the Ambassify Platform

Considering the scope and the budgetary constraints of this test, both we at Ambassify and the team at NVIDIA are very satisfied with what was accomplished:

Our future advocacy campaigns with NVIDIA will be powered up with:

A team dedicated to building and maintaining relationships with the advocates - this team will be in charge of posting support, engaging with advocate’s shares and comments, and more, all done in an effort to keep the advocate coming back.

Consistency in creating content for the advocates to share - unfortunately, due to the internal goings-on of NVIDIA’s German team (other marketing activities), we couldn’t keep up with content creation as much as we wanted, which is crucial for an advocacy program. We plan to tackle that issue moving forward.

A balanced rewards system - one of our key end-of-project recommendations to NVIDIA was to reinvent their particular rewards process. In their case, the rewards system could be improved by lowering the threshold of points needed to claim certain perks (but this was not tested). At the time of the project, advocates didn’t claim any of the rewards owing to a high threshold. Having a mix of reward tiers might help with making the rewards a worthwhile motivator in the minds of the advocates. That said, in a well-run community, rewards seem to have a limited impact on participation (and non-monetary rewards always outperform freebies, discounts, and money). 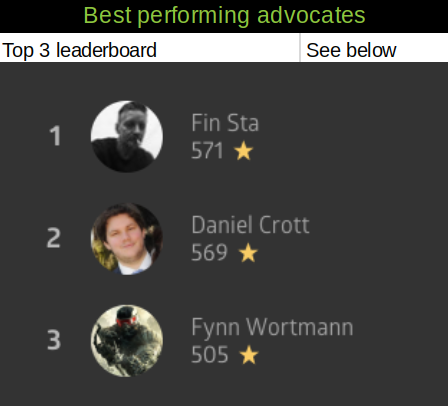 That said, the results that were obtained just from the ‘promise’ of a reward and solid relationship-building activities were still impressive. This only serves to prove that advocacy programs do work when time and effort are devoted to them. It also underlines the fact that rewards are important, but are not crucial for the success of advocacy campaigns.

Are You Ready To See a X5 Increase In Engagement from Your Communities?

Check out Ambassify’s Tour Page & Sign Up for a FREE Demo!

Turn Your Customers and Employees Into Loyal Brand Advocates
Activate your happy customers and motivated employees to spread the word about their favorite tech and software. Turn them into your brand’s (social) salesforce.

"After a detailed review of both national and international players in the brand advocacy field, we have chosen Ambassify for their process-based and future-proof approach topped by their attractive price-quality offering." 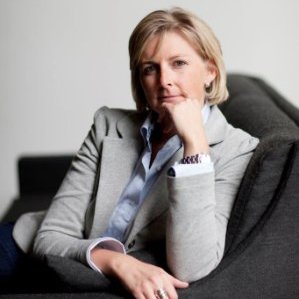 "We all know the importance of testimonials in . For our B2B gift boxes business,  testimonials skyrocketed. A staggering 25% of our advocates wrote a testimonial when being asked!" 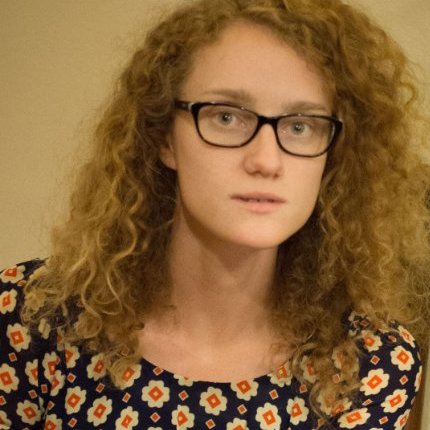 "The Ambassify ambassador marketing platform is a useful solution with lots of . We use this to easily set up user-generated-content interactions with our brand ambassadors, and continuously work with them." 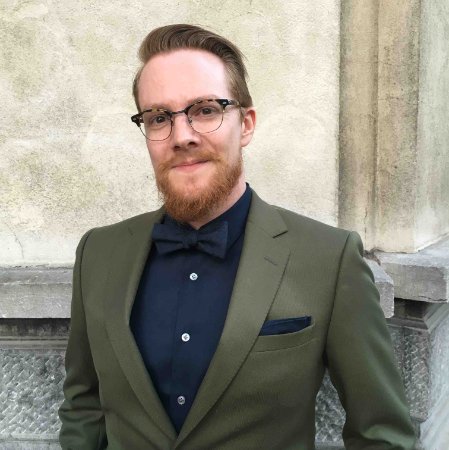 "The average deal size almost doubled when our advocates bought or referred others to our web shop, and a staggering 25% wrote a testimonial when being asked. Also, deals closed twice as fast as in our normal sales cycle." 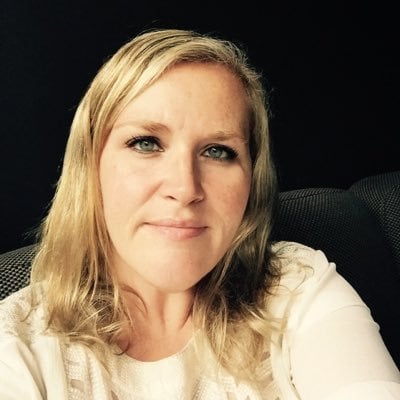 Dive right into the action!

Get a free demo of the Ambassify Platform and discover how your Brand Advocates can get you the reach and credibility you’ve always dreamed of.